“One hundred percent chance of rain, medium chance of thunderstorms, cloudy, windy and cold.” That’s what they said. But Trump was right. It’s fake news, all of it. 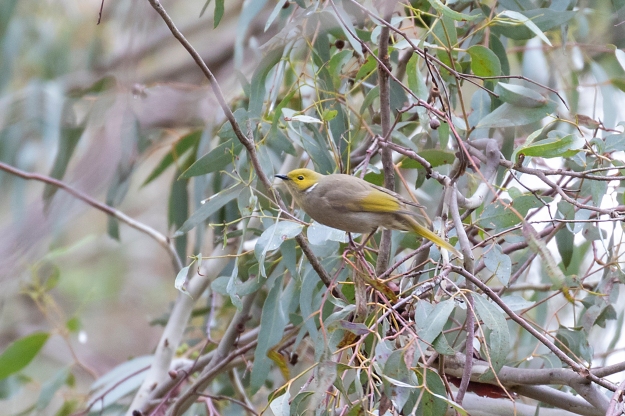 This one was for the true believers.

We arrived at Rise and Shine in glorious winter sunshine and a balmy 11 degrees, barely a breath of breeze. The 14 true believers were well satisfied and, appropriately social-distancing, set off in search of feathered friends.

Rise and Shine Bushland Reserve in Ramseys Lane has a terrific mix of terrain –graveled bushy areas fit for all robins, gums for many Honeyeaters, open woodland and paddocks for insectivores and a few dams for the water-lovers. And we saw many of each.

At first things were fairly quiet – presumably the birds had received the same fake bleak weather forecast and decided to sleep in. Even though the skies clouded over for a while, the robins and Honeyeaters then started to show themselves. Flame, Scarlet and Eastern Yellow added splashes of colour low down in the gravel areas and Yellow-faced, Yellow-tufted, White-plumed, New-Holland and White-naped flashed high up in the canopy. Golden Whistlers and Laughing Kookaburras contributed their song to the colour show.

White-throated and Brown Treecreepers added their calls in the wooded areas, poking out from behind trunks as they scurried up to catch moving prey.

The woods yielded Peaceful Doves, Grey Shrikethrush, a Grey Currawong and some White-winged Choughs. Overhead we had a series of fly-bys including a Brown Falcon, a Whistling Kite and some Galahs, Sulfur-crested Cockatoos and Little Corellas.

For many, the morning highlight was a pair of Restless Flycatchers zitting their way through the edge of the woods next to open paddocks.

Suitably rewarded with 39 species, we adjourned to nearby Newstead Park for a well-spaced lunch in sunshine, fortified with espressos and tasty offerings from the Blackbird café – luxury. And a fitting place to celebrate a birthday (Michiko) and a pending farewell (Sonja).

Well refreshed, we headed back to the southern part of the bushland, to Zumpes Rd and its Pickpocket Diggings. On arrival we were distracted by three socially-distanced raptors slowly circling high overhead. With lots of long lenses and powerful binoculars trained to the heavens, we argued long and hard whether they were indeed Square-tailed Kites, an exciting find, or more mundane Little Eagles. Careful post-mortems of the photos revealed two Little Eagles and a Swamp Harrier.

The true believers were well pleased with their 48 species for the day and some good birds in the mix. Just goes to show, the weather is whatever you want it to be.