My day started in Melbourne., it was a dark and stormy morning with heavy showers.  It didn’t look too good for a day’s birding. But I was heading north to Mount Tenneriffe, on the way to Euroa where the Birdlife Melbourne Photography group had an appointment to keep with Frank and Val Kneebone, who kindly let our group visit their bush block. 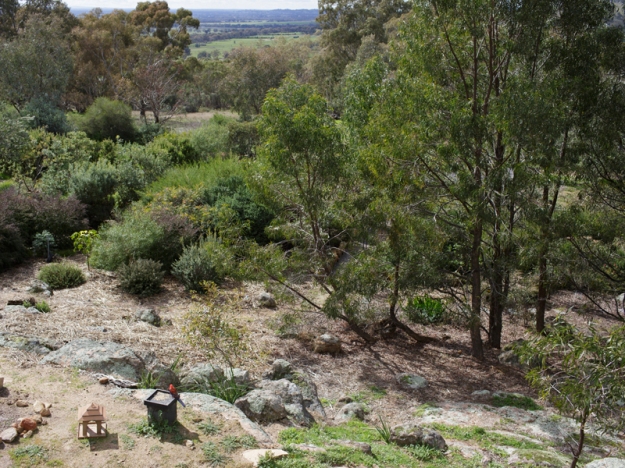 View from the house – Merrilyn Serong

Sure enough, getting past Seymour the sun appeared and though it was cold, the weather did not interfere with our activities for the day.

About a dozen eager birders enjoyed the country hospitality and then set off for a wander around the Block.  It did not disappoint with Speckled Warblers seen feeding on the grass and Spotted Pardalotes calling everywhere. A Horsfield’s Bronze-Cuckoo was also noticed, not far away from a Scarlet Robin. A variety of Honeyeaters were seen;  New Holland, White -eared, Yellow Faced as well as an Eastern Spinebill and Red Wattlebirds.

After looping around the block we settled in for our lunch, watching the Crimson Rosellas and Red-browed Finches feed in the garden.

Val and Frank with some likely suspects – Merrilyn Serong

We were then off to Wallaby Gully Nature Conservation Reserve.  This is a reserve hardly anyone would know about. Maybe it’s because it is just a little far away from the big smoke. And besides, most birders travelling up the Hume would normally be more keen to get to more famous locations such as Chiltern or the Warby Ranges.  Wallaby Gully Reserve is a little gem of a spot, with mossy rocky outcrops, 100 km distant views to Mount Buller and plenty of bird habitat.

A flock of White-winged Choughs made their presence known when we arrived and then we spent some time exploring and discovering other wildlife such as Swamp Wallabies and Wombats.

Others were able to find Orchids. And, oh yes, there were also some birds, such as Varied Sittellas, various Thornbills, a Wedge-tailed Eagle soared by while a Southern Boobook posed conveniently in broad daylight for one lucky person.

A satisfying day for all.