The day started with seventeen eager birders at Cape Schanck. With a stiff northerly blowing, expectations were not too high.

Most of us wandered over to the track to Bushrangers Bay where some bush birds were seen sheltering from the wind. Some fine views of Albatross were observed. So much for the theory that only a strong southerly brings the Albatross in. The rest of us went down to the boardwalk. It’s spectacular coastline. At least one group of landscape photographers thought so as well so we were not the only group with cameras.

Birding wise was a bit quiet on the boardwalk we did see a Grey Shrike-Thrush and had excellent views of some Singing Honeyeaters. A Nankeen Kestrel was also observed on the ground but kept tantalisingly out of reach of a good shot.

Before we knew it we were off to our next destination, Mushroom Reef at Flinders. Most of us went down to the right from the car park. Apparently there were some Hooded Plovers to the left but the near high tide made it difficult to walk in that direction without getting wet feet. The cameras got a workout with a cooperative Willie Wagtail and plenty of Gulls also provided entertainment. 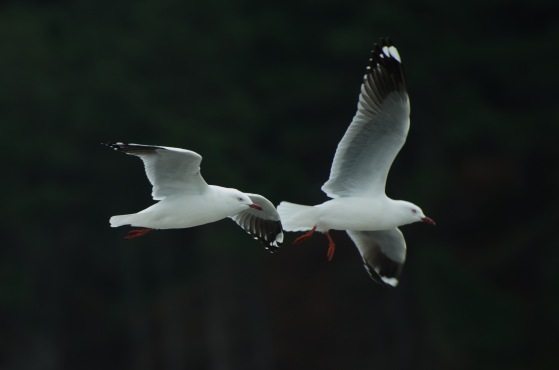 A pleasant Lunch was eaten at the Flinders Pier and then for the final part of the outing it was off to Greens Bush. There was quite a bit of bird activity. Most took the shorter walk. And there were also some interesting orchids found in the carpark.

Before lunch we saw 35 different species and then another 24 at Greens Bush.

The next outing will be at Bunyip State Park on June 21.

Meet at 10 AM at the Buttongrass walk which is on Camp Road very close to the corner with Gembrook-Tonimbuk Road.

The easiest way to get to there is from the Princes Highway. From Melbourne turn left at the Tynong North Road exit. Drive up this road and then take Camp Road after about 10 km. Buttongrass is about 12 km from the Princess Highway.